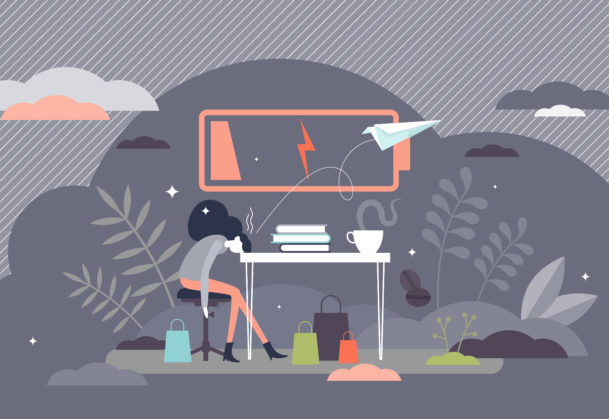 When I initially sat down in front of my MacBook today, I wasn’t planning on writing a blog. In fact, I barely wanted to open WordPress to see the timestamp on the last thing I wrote because it feels like it’s been too long (see: Anyone). Then… I opened an old post.

EXACTLY one year ago today, on June 18th 2020, I wrote a blog called The Great Pretender, where I told everyone that my outward appearance wasn’t an accurate depiction of what was going on inside my head. Something was missing, and I wanted to be the one to find it. In that blog, I also made a vow to be more open with what’s wrong with me, and since then I can actually say that I have been. After reading it I came here with the intention to update y’all on just that, because something isn’t necessarily missing anymore, I’m just exhausted.

Over the past year or so, I’ve been so reliant on social media and crying in the shower as an outlet that I forgot about the one thing that I’ve always been good at – writing. I’ve owned this domain for the past 6 years, so maybe it’ll be good to finally use it for what it was intended (especially now that I have a bachelor’s in English Writing and Psychology). I mean, the only thing that’s been preventing me from writing has been me, and my primary excuse was that I wanted to refrain from being passive aggressive in any way. On the other hand though, I’m turning 25 this year, so why am I still so afraid of hurting people’s feelings when they’re not afraid to hurt mine? (see: childhood trauma; fear of confrontation). So, this might be a one-and-done blog, or I’ll follow up with actual stories. What it all narrows down to though is that I’m fucking exhausted, and I’m sure you are too.

Call me sensitive, call me a millennial, or even call me a snowflake (although, who’s really the snowflake here), I’m just tired of living life so stressfully because someone decided they didn’t want to wash their clothes on a rock anymore. The very fact that every single thing we do was just an idea someone had in their brain is just mind-boggling to me.

We’re literally CHOOSING to work 40-50 hour weeks because the generations that believed everything their presidents told them (see: Nixon, Reagan, Clinton) decided that increasing the minimum wage… along with everything else… didn’t make sense. They believed that we needed credit scores to handle our debt, so they invented them. Overtime, the interest rates on student loans are more than the loans themselves. Renting a home costs more money than buying one. People are still in jail for cannabis charges when medicinal cannabis is legal in 36 states (heaven forbid all 50 one day). Not to mention the fact that we had a trial for a murder everybody saw on television. Then, don’t even get me started on healthcare because my grandma shouldn’t need THREE different coverages in order for her to be able to afford anything medical, but, that’s just how it is right? We’re meant to just see our loved ones on the weekends (or two weeks out of the year), while we do chores, errands, and find time to have a social life, after working ourselves to exhaustion during the week. Don’t even get me started on COVID-19 and the way that’s been handled because whew, I just love being an American.

Y’all wanna know the real kicker though? The generation that I’m speaking about above, are also the same one’s that’ve raised their kids to think the same exact way. Then, if their kids grow up to have any ounce of… well, what narrows down to common sense or awareness, they get called sensitive and end up ostracized because being “right” is more important than learning new information (can’t teach an old dog new tricks I guess). So, imagine that.

With me being on social media as much as I have, it’s not hard to pick up on the patterns. Most of the time these types are the same one’s with big flags on their trucks screaming at the LGBTQ+ about throwing their identity in our faces, while they keep their hands down 45’s pants and cry about a white supremacist social media app being banned (just calling it like I see it). Yet, we’re the snowflakes because we asked you to put pronouns in your bio and say the earth is a sphere – lol, got it. I didn’t know adulthood just consisted of being around a bunch of hypocrites, and honestly, I’m not doing it anymore. And no, not everyone from that generation is the same, but if the shoe fits, wear it. I’m just not going to sit by complacently like the silent introverted kid at family dinner while getting manipulated, gaslit, and told that I’m lesser than because I’m “young” (is 25 even young these days?).

What it narrows down to isn’t even just common sense anymore, it’s respect and basic human decency. I’ll never understand how such a massive group of people saying “We’re hurting, and we’re tired of hurting” could be met with hate. This doesn’t even just apply to the Black Lives Matter movement either (although you ALM people still don’t get it huh) it goes for literally everything nowadays. Everything is a competition, whether it’s money, how many hours you’re working, what car you drive, etc. Bowling for Soup really was right, High School Never (fucking) Ends.

If you’re lucky though, you’ll find someone who helps existing be less exhausting. Someone that’ll make you want to wake up every day and be the best person you can be, despite all of the people outside. For me, that’s my husband (and.. definitely my cat). For you, that might be your partner, your family member or best friend (I know it’s mine), it could even be your pet or the plants you can’t seem to stop buying (someone’s gotta water them).

In the end, I might be mentally ill and have my own dependency issues, but that doesn’t mean I don’t know what I’m talking about because my disorders are what make me so aware. After all, the one’s who are quiet are usually the one’s that are listening, while thinking about what other’s aren’t. For me, I’ve figured out how to think before I speak (or post), I do research before I claim to know something, and I make sure I’m not being offensive by — wait for it — not being an asshole, and it’s that simple! Crazy how someone who used to be such an ignorant 13-18 year old (@ my influences at the time *barf*), can be so open-minded and more hyperaware of how I behave. It’s almost as if doing research and accepting research-proven theories was beneficial to my growth or something. Huh.

If you’ve read this, I’m sorry. Mercury being in retrograde has been a bitch, and I’m just so tired of hiding. Over the past year or so I’ve also lost a few friends due to differing opinions as well (Planned Parenthood? gas price correlation? if climate change is real?), but they’ve proven to not be the best people since then. However, I’m not one to speak ill on those who don’t want to be in my life anymore because well, it’s literally their loss. Plus, now I know who my real friends are, and I’m better off without them (and you are too if you’ve lost friends under the same circumstances). This year has just been a lot already and it’s only June. Hopefully Leo season will bring me some peace of mind like it usually does, but until then, I’m just going to continue to be my authentic self and try to focus more on the good now that I’ve put this all out there.